The Sydney Sixers have won their second Big Bash trophy after beating the Melbourne Stars by 19 runs in a rain reduced final at the SCG.

With huge amounts of rain around Sydney it looked as though we wouldn’t see any play but the rain cleared enough to see a 12 over a side final.

The Sixers looked good in the first two overs after being sent in. The found their feet early in the power play as Josh Philippe found the boundary off Nathan Coulter-Nile before putting him over the fence.

Following a tight first over Daniel Worrall made the early breakthrough, removing the dangerous James Vince. The English import mistimed a short ball that just lobbed out to mid-on.

Superstar Steve Smith joined the party and with just a three over powerplay, he got into the action early, finding the rope off Daniel Worrall. He the pounded Haris Rauf for a massive six over mid-wicket before slapping him through extra cover to find the boundary and get the Sixers to 1/40 from the first four overs.

Melbourne Stars skipper Glenn Maxwell turned to spin after the power play and it paid dividends. Adam Zampa went for eight runs in his first over but Maxwell then brought himself on snagging the huge wicket of Steven Smith with his very first ball. Smith attempted to slog it over the fence but only managed to get a top edging, picking out the man on the rope.

Zampa knocked over the Sixers captain Moises Henriques the very next over before Maxwell picked up his second wicket trapping Daniel Hughes lbw for a golden duck.

The quick wickets for the Stars restricted the boundaries from the home side despite Josh Philippe still being at the crease and it wasn’t until Jordan Silk smashed Coulter-Nile over the fence that Sixers found some fast runs.

The Sixers then took Haris Rauf for another 11 runs, leaving him with 0/36 from his three, passing the hundred mark in the second last over.

Josh Philippe brought up his half-century in the final over, smashing Zampa for six but was bowled on the final ball leaving the Sixers at 5/116 from their 12 overs.

The tournaments leading run scorer Marcus Stoinis looked to attack from the star, whacking Nathan Lyon over mid-off first ball of the innings before smashing him for six. However, the Sixers gamble paid off as Stoinis picked out Abbott on the square leg boundary just the fourth ball of the match.

14 runs from the over, but Lyon gets the big/huge/massive wicket of Stoinis! #BBL09 pic.twitter.com/jssFaIdQjK

The start quickly got worse for the Stars as Nic Maddinson struggled to find any rhythm against Josh Hazlewood before lobbing a mistimed cut shot to cover off the big fast bowler.

When off-spinner Steve O’Keefe trapped Glenn Maxwell lbw the very next over the Stars were in big trouble at 3/19 after the powerplay.

The demons started the creep in for the Stars and it defied belief when Peter Handscomb was run out following a mix-up despite there being no realistic chance of two.

Nathan Lyon quickly claimed his second wicket to have the Stars five wickets down and as the batsman fell the run required run rate become too much for the visitors. Steve O’Keefe also claimed his second scalp, removing Seb Gotch.

Late hitting from Nathan Coulter-Nile wasn’t enough to save the Stars who slumped to a second consecutive BBL grand final loss, handing the Sixers their second Big Bash title. 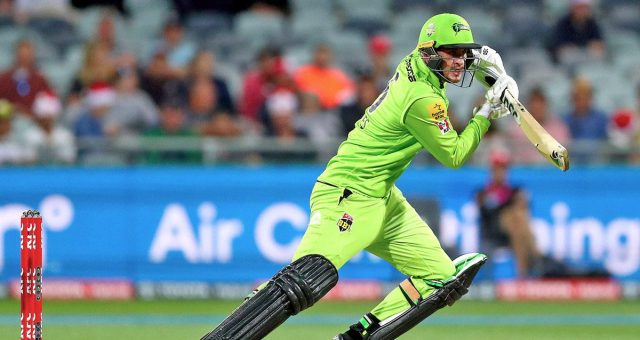 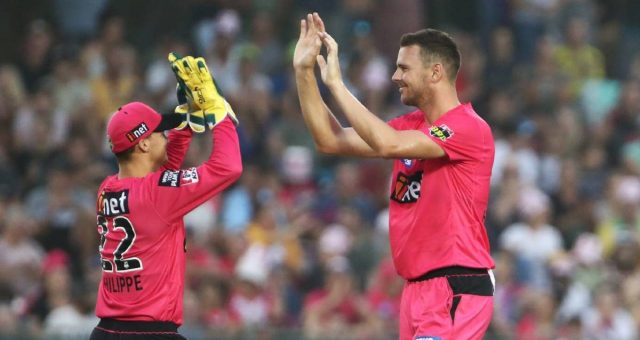