After a miserable Ashes tour, David Warner has shown his dominance on home soil, scoring an unbeaten century in his first Test match of the summer on home soil. Warner’s 151 not-out has helped Australia gain a lead on day two at the Gabba, as Pakistan fail to capitalise on their excellent first session of the match.

After bowling Pakistan out for 240 on day one, Australia started fresh on the second morning at the Gabba with David Warner and Joe Burns looking to stabilise the Australian top order. The incredible form of Steve Smith and the rise of Marnus Labuschagne in the most recent Ashes series somewhat painted over the cracks in the Australia openers and their struggles in past series.

With warm conditions in Brisbane the pitch had flattened out and the pair took advantage of the favourable batting wicket, attacking the Pakistani bowlers from the get-go, looking comfortable and happy to be back on home soil.

Joe Burns had some early luck, surviving a run-out and nearly being caught before slapping two boundaries to build he’s confidence. Warner appeared to have no issues from ball one or any uncertainty that plagued his Ashes series and together with Burns put fifty on the board inside 10 overs.

Highlighting how poor the openers were in the most recent Ashes series, the pair quickly passed 85, the total runs scored as opening partnerships from all 10 innings, before getting to lunch 100 with no loss.

If I was Pakistan coach I would insist that all bowlers after lunch come out wearing Stuart Broad masks #AUSvPAK pic.twitter.com/PN2f6m8YVY

It wouldn’t take long after the luncheon break that Pakistan finally got a sniff, as 16-year-old tearaway quick Naseem Shah found the edge of David Warner’s bat and looked to have his first scalp in Test cricket. In cruel fashion, the replay showed that the youngster had clearly over stepped.

It was a little ironic on the back of yesterdays controversy that saw Australian paceman Pat Cummins claim a wicket following a contentious call from the TV umpire. Despite replays casting doubt over whether Cummins had any part of his foot behind the line, the third umpire concluded that there wasn’t enough evidence to overturn the on-field decision.

Even though he’s a fast bowler, @BrettLee_58 says nothing behind the line. #AUSvPAK @FoxCricket pic.twitter.com/wCcF21KN4N

Warner made the most of the reprieve, powering into the 90’s looking to bring up his century before the tea break. Burns managed to get Warner back on strike with two balls to go but the 33-year-old only managed a single of the last ball to leave him 99-not-out at the interval.

It wouldn’t take him long after the break to get the run he needed, bringing up his first century since 2017. The relief was apparently has he completed his customary leap into the air.

This left Burns not far behind and Australian fans were waiting with bated breath as the recalled Queenslander crept toward a ton. It was heartbreak however, as Burns dragged a sweep shot onto the stumps from leg-spinner Yasir Shah just three runs shy of a century.

Fresh off good domestic form, Ashes sensation Marnus Labuschagne continued to piled the pain on for Pakistan as he joined Warner in the final session, looking comfortable in his first Test match in the country.

The 25-year-old became the first ever ‘concussion substitute’ in the most recent Ashes series, replacing Steve Smith who was hit by a bouncer from English quick Jofra Archer in the second Test at Lord’s. The young Queenslander scored four consecutive half-centuries after being bring into the team, helping Australia bring the little urn home back from England for the first time since 2001.

The pair quickly pushed the Australian total past Pakistan’s 240 and looked to build a small lead before stumps. Warner soon brought up his 150 but it would be Labuschagne who took control late in the day, bringing up a half-century just before stumps.

It was almost a perfect day for Australia who finished the day 1/312, a lead of 72. To make matters worse for Pakistan, there is a man by the name of Steve Smith still waiting in the sheds. 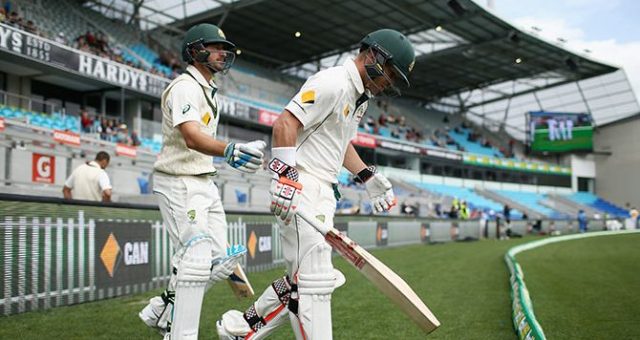 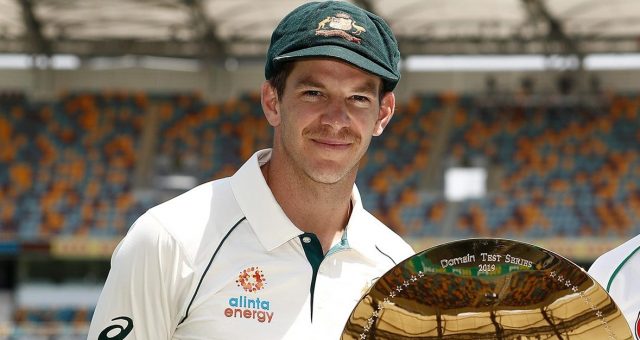 Australian XI confirmed for 1st Test at the Gabba